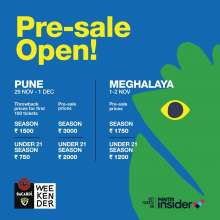 As a Special Celebratory Tribute to Pune, Early Birds Can Buy Tickets at 2010 Prices!

The much-awaited pre-sale for India’s happiest music festival, to be held in Pune and Meghalaya this November, will begin today - 1 August, 2019. This year, Bacardi NH7 Weekender (conceptualised by OML) celebrates 10 years of giving its many loyal fans and attendees the happiest weekend of the year with electrifying live performances across multiple genres of music. To commemorate year 10, the festival is letting the first 100 early bird buyers purchase pre-sale tickets for the Pune edition at the 2010 prices! Pre-sale tickets for Meghalaya are also available, with special rates for fans under 21 years of age.

Pre-sale for Regular and Under 21 Season tickets for the Meghalaya edition -- its fifth appearance in the state -- are available to fans at early bird prices of ₹1750 and ₹1200 respectively.

After the first 100 tickets in each category are sold out, pre-sale tickets will be available for ₹2000 for Under 21 tickets and ₹3000 for Regular Season tickets.

Since its inception by OML 10 years ago, BACARDÍ NH7 Weekender has featured over 600 artists from India and around the world across a variety of genres to over 600,000 fans. Bacardi NH7 Weekender 2019 promises to feature multiple genres, with international headliners and varied names from the Indian music scene. The lineup will be out soon, so stay tuned.

Pre-book your season tickets for the country's most beloved musical weekends at www.nh7.in  and stay tuned to the BACARDÍ NH7 Weekender social media pages for more information on the festival.

OML is a global, artist-first company that creates intellectual properties (IPs) for content platforms, live entertainment and brands, that have become synonymous with pop culture in India and across the world. OML’s global creator network spans 200+ artists across genres and across 20+ countries.

Working at the cross-section of content, talent representation and live experiences, OML has produced promoted and presented sold out tours in India and abroad for some of India's biggest entertainment properties, from BACARDÍ NH7 Weekender (described by The Guardian as "India's answer to Glastonbury") to Breezer Vivid Shuffle (India’s largest hip hop festival) and LOLstars and Headliners in comedy. They have also produced 200+ hours (3.6Bn minutes watched) of memorable and iconic online properties, series, standup comedy specials and content pieces across genres for television and various multimedia platforms such as Sound Trippin’, The Dewarists, Comicstaan, Laakhon Mein Ek, Pushpavalli, Chacha Vidhayak Hai Humare and Queens of Comedy.

Bacardí Limited, the largest privately held spirits company in the world, produces and markets internationally recognized spirits and wines. The Bacardí Limited brand portfolio comprises more than 200 brands and labels, including BACARDÍ® rum, the world’s best-selling and most-awarded rum, as well as the world’s most-awarded spirit; GREY GOOSE® vodka, the world’s leading super-premium vodka; DEWAR’S® Blended Scotch whisky, the world’s most-awarded blended Scotch; BOMBAY SAPPHIRE® gin, the top-valued and fastest-growing premium gin in the world; MARTINI® vermouth and sparkling wines, the world’s leading vermouth and the world's favorite Italian sparkling wines; CAZADORES® 100% blue agave tequila, one of the most popular premium tequilas in Mexico and the United States; and other leading and emerging brands including WILLIAM LAWSON’S®, the fastest-growing global Scotch whisky brand; ERISTOFF® vodka, one of the fastest-growing vodka brands in the world; and ST-GERMAIN®, a super-premium elderflower liqueur. Founded 157 years ago in Santiago de Cuba on February 4, 1862, family-owned Bacardí employs over 6,000 people, manufactures its brands at 27 facilities and sells in more than 150 countries. Bacardí Limited refers to the Bacardí group of companies, including Bacardí International Limited. www.BacardíLimited.com