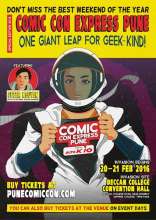 
For the first time ever Comic Con India is bringing International Comic Book guests to an express version!


Costume Play: Kids and adults can come dressed as their favourite comic, superhero and gaming characters. An awesome chance to win A TRIP TO MIDDLE EAST FILM & COMIC CON this year!

India, Jan 20’ 2016- Comic Con India is pleased to announce that the travelling version of the Indian Comics Convention, Comic Con Express is going to a new city yet again this year; the Youth City of India - Pune. Comic Con Express Pune driven by ALTO K10 will take place over the weekend of February 20-21 at Deccan College Convention Hall from 11 am to 8 pm.

Comic Con Express Pune driven by ALTO K10 is a travelling version of Comic Con India’s flagship shows held across the country. The express version was started with the aim of taking the comics convention to cities throughout India to support and boost the comics industry by local interaction and participation. With the enormous response Comic Con India is receiving across cities, it is all set to entice audience in Pune this year. This will be the forth express tour but first for Pune. The earlier three express versions in Mumbai, Bangalore and Hyderabad have been converted into annual events, as the response has been remarkable.

Comic Con India is planning a slew of fun filled and interactive activities. The convention will have the who’s who of Comic book world, popular International and Indian guests. The event will feature the best of Comics, Television, Films, Gaming, with tons of Books, Merchandise, Action figures, and comic book artists and creators from across India and the world. CCE-Pune will also feature the biggest Cosplay contest ever held in the city!

Jatin Varma, Founder, Comic Con India, shared, “I am extremely excited to bring the Comic Con experience to Pune! Comic Con Express is a traveling version of our bigger shows, incorporating all the key elements of pop culture. The show in Pune will feature a sampling of the best in Indian & International comics along with content from films, television & gaming. We at Comic Con India, can't wait to celebrate the best weekend of the year with fans in the city!”

Famous International Comic Book guests Ivan Brandon & Peter Nguyen will be attending and taking special sessions at Comic Con Express Pune. Ivan Brandon is the Author of Final Crisis Aftermath: Escape and Kobra and Secret Invasion. Peter Nguyen is known for his work in Batman Arkham Unhinged. This is for the first time ever that Comic Con India is bringing International Comic Book guests to an express version.

Cosplay (costume contest), one of the major attractions at Comic Con India, will be the biggest Cosplay contest ever held in the city! It will be more appealing and will continue to give assured prizes to people in great costumes. Comic Con India under its 5 categories - 1. Comic book/graphic novel 2. Animated Series/Movie 3. Manga/Anime 4. Sci-Fi/Fantasy and 5. Gaming will choose one winner in each category each day. Also on both the days, One lucky winner out of the chosen 5 will get a chance to win A TRIP TO MIDDLE EAST FILM & COMIC CON 2016!

There will also be exclusive merchandise by Indian merchandisers including Graphicurry, Fukvaas, Planet Superhero, Bushirt, Sheepstop, Being Indian, Wear Your Opinion and lots more!!

Comic Con India is dedicated to creating unique events and giving the fans, exhibitors and partners a platform to celebrate their undying love and passion for comics & pop culture. Comic Con India is dedicated to expanding India's popular culture by creating high profile events that cater to fans of not only comics, but also, gaming, movies, television, merchandise, toys & more.

Comic Con India is part of the Reedpop family of events, which is dedicated to producing world-class celebrations of popular culture around the world with events like New York Comic Con, Oz Comic Con, Shanghai Comic Con, Star Wars Celebration among many others.